How could CO2 laser processing transform food production of the future? Find out how this contact-less technology might help here…

Technological innovation in processing is one of the fundamental pillars on which the improvement of the efficiency and profitability of the food industry hinges. Among the technologies studied in recent years, the CO2 laser has remarkable capacity to transform the food production of the future.

Temporal and spatial precision of lasers make it possible to concentrate the laser energy in a tiny spot and follow complex patterns, without overly impacting nearby food material.

Food safety culture: what is it and how do we measure it?

This is particularly of interest in several mechanical and thermal processes. For instance, it has been proposed to inactivate microorganisms on food contact surfaces. It can also be used for non-contact cutting, avoiding the physical, chemical and microbiological cross-contamination problems of other systems such as blades or water jet; or for food marking, replacing paper/plastic labels and inks.

A laser (an acronym for light amplification by stimulated emission of radiation) consists of an energy supply system that energises the molecules of a gain medium to an excited state, producing light.

This light is amplified in an optical cavity restricted by two mirrors, one of each partially transparent letting pass a coherent and directional laser beam, which can be focused on the target material with temporal and spatial precision by a lens system controlled by a software.

Carbon dioxide (CO2) lasers were given their name because they use CO2 as the main component of the gain medium, emitting a laser beam in mid-infrared wavelengths (typically 10,600 nm).

Infrared wavelengths are transmitted almost without loss in the atmosphere. Furthermore, they can be effectively absorbed by water, which is the main component of foods. Thus, both are likely to be the main reasons of the interest that CO2 lasers have received in food processing.

By modulating the radiant energy of the CO2 laser beam, photochemical, thermal, and mechanical effects are progressively produced in the food.1 If CO2 laser energy is low, the laser only disturbs the bonds between atoms and between molecules. At higher radiant energy, the laser beam energy is converted into thermal energy, heating the surface of the food (a depth of a few millimetres) in a precise and controlled manner.

By further increasing the radiant energy, direct mechanical effects can be produced on the food surface, eventually forming a crater based on vaporisation and ablation phenomena.1

The ablation process can be repeated in the lower layers of the food, enabling it to go deeper into it, or/and continue in the adjacent zones following a specific pattern. Based on these effects, the CO2 laser can be used for a wide range of food applications including microbial decontamination, cooking, marking, and cutting.

The CO2 laser is a non-contact and relatively fast technology to inactivate microorganisms on the surface of different substrates and is an alternative to traditional surface cleaning and disinfection systems, such as the use of chemicals, a solution that is increasingly being questioned due to possible toxic residues.

For food contact surfaces (e.g. cutters, conveyor belts) heating is not a major problem and laser accuracy and processing speed can play a major role. For example, total inactivation of Escherichia coli and Staphylococcus aureus has been reported in stainless steel surfaces after CO2 laser treatments (660 W; 0.8-1.3 cm/s).2 Apart from the microbial inactivation, the mechanical effects of the CO2 laser can also help to remove hard-to-clean organic matter and biofilms from these types of surfaces.

CO2 lasers are also capable of inactivating microorganisms present on food surfaces.3 However, in this case, the treatments must be very well optimised to minimise the impact on their surface characteristics, avoiding mechanical effects and minimising the thermal effects.

Despite optimisation, surface changes, such as colour alterations, are usually detected. The use of flavonoids, riboflavin or other antioxidants could reduce or even avoid these adverse effects.4

The CO2 laser can be used as an alternative to conventional thermal technologies for cooking, grilling and browning, taking advantage of the high energy of the light beam.4-5

However, in this case, the carbonisation and ablation processes (thermal and mechanical effects, respectively) associated with high-energy intensity treatments should be avoided.

The precision of the CO2  laser means that only one of the food parts can be cooked (e.g. only the fatty portion of a piece of bacon), or even each part of the food at its optimal conditions (temperature, time), changing on the fly the treatment energy and the exposure time.5 In this context, CO2 laser has received special attention in the 3D printing of foods, where precise heat delivery is needed for cooking pre-printed food.5 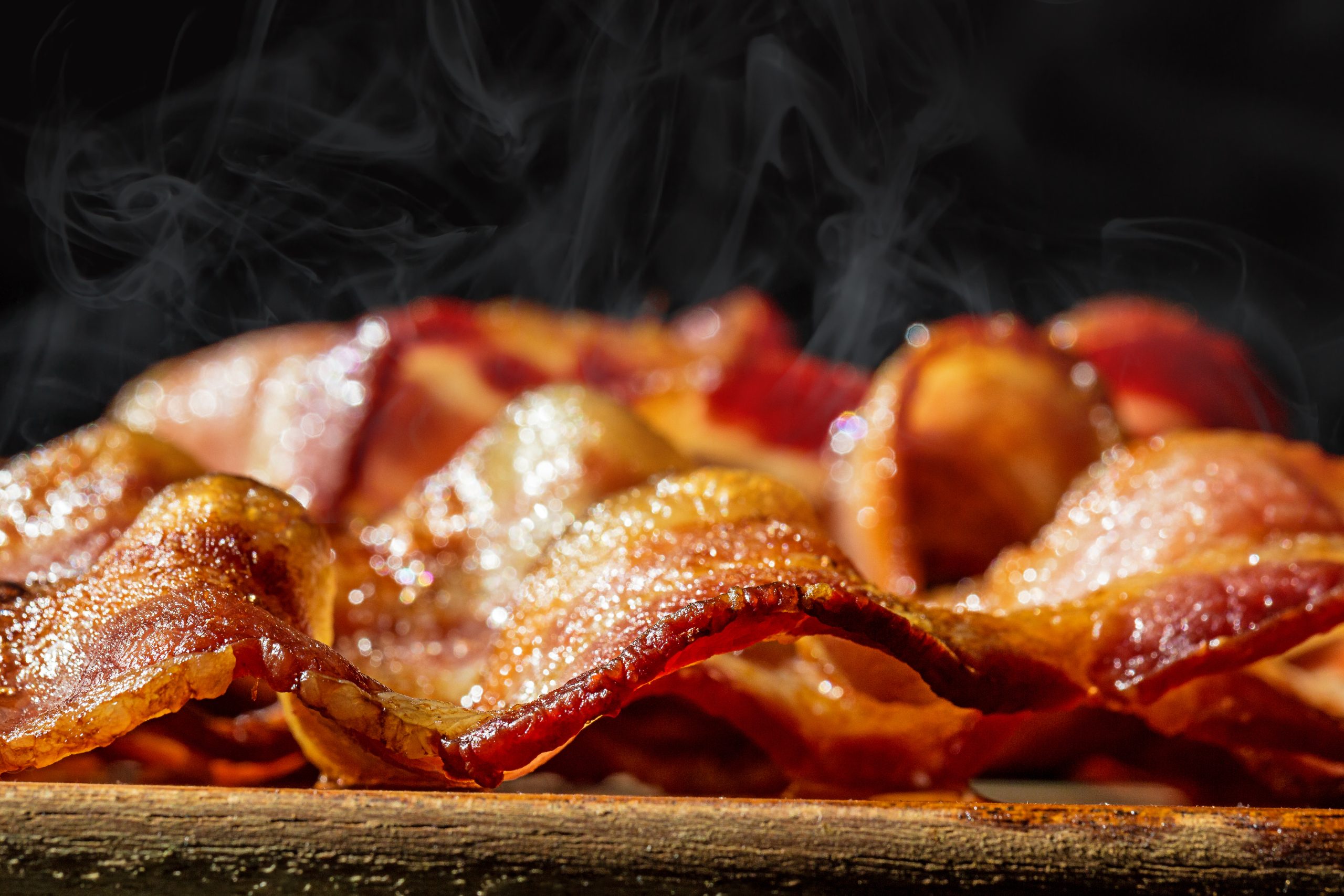 The authors’ note that the precision of the CO2  laser means that only one of the food parts can be cooked such as the fatty portion of a piece of bacon.

The laser energy only penetrates a few millimetres into the food, meaning it has been proposed for cooking thin foods or for surface treatments such as grilling or browning. For many products, combined use with other technologies such as microwaves has been proposed, using lasers for surface finishing (e.g. grill marks).3

The use of laser for fruit and vegetable marking is authorised and implemented in the industry in several European countries. They have been tested in a wide number of foods, including fruits, vegetables, eggs, meat, cheese, chocolate and cereal products (Figure 1). 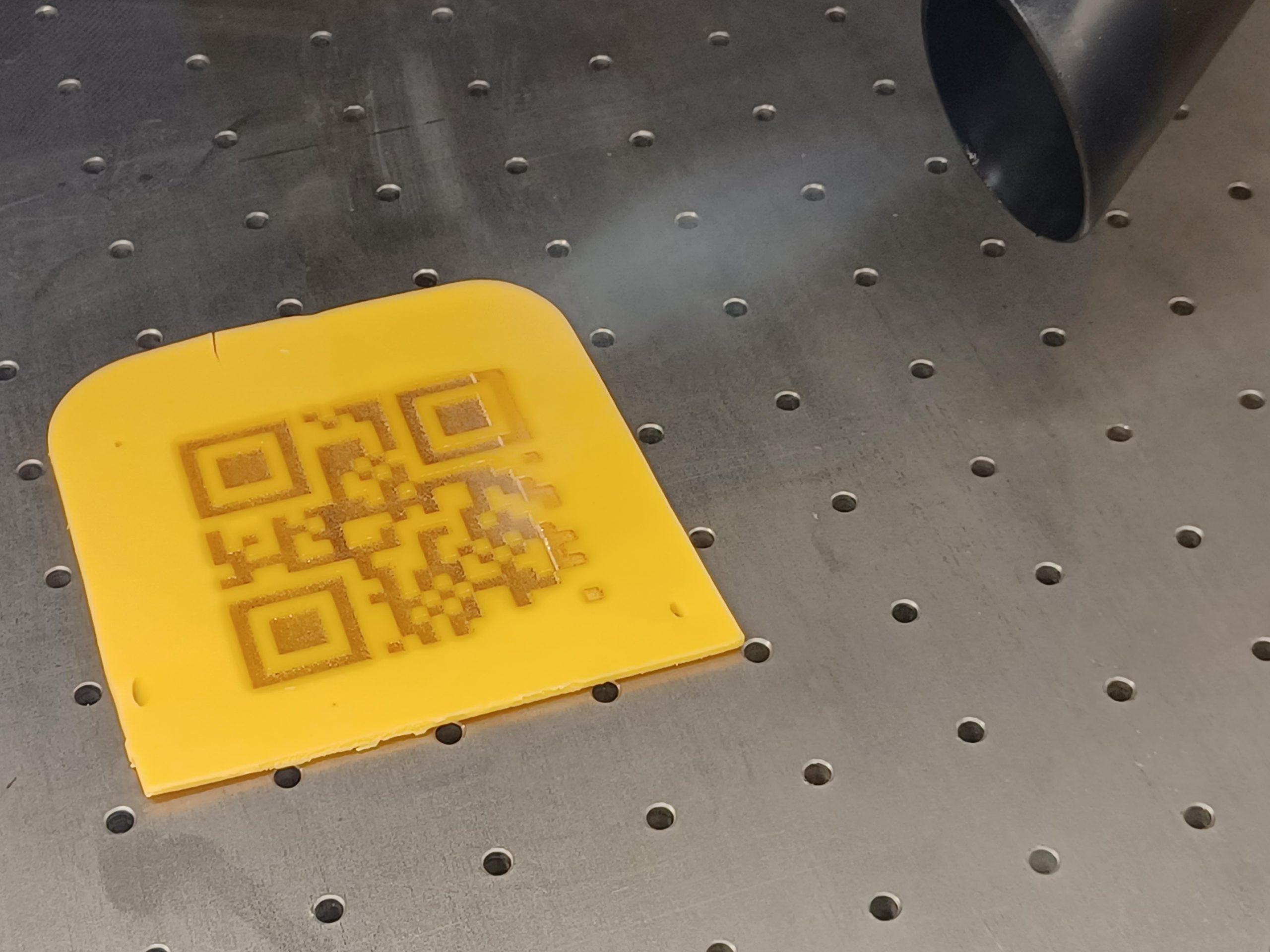 Figure 1: Marking of a QR code by CO2 laser in cheese (example of laser processing).

Its interest lies in the fact that it does not require plastic/paper labels or adhesives and that it is made to avoid any contact. From a general point of view, CO2 lasers can be used for marking based on their mechanical (engraving) or thermal effects (Maillard reaction).

Relying on the ablation phenomenon, the CO2 laser can be used as a non-contact technology for cutting and peeling or for other mechanical procedures such as perforation that can be used in some operations such as marinating or extraction of compounds.1,4

Firstly, the processed area is partially decontaminated due to the action of the laser beam (microbial inactivation), a key advantage for food safety compared to blade or waterjet cutting.

It is also possible to process foods according to complex patterns that are difficult or even impossible to achieve with conventional techniques.

The most important limitations of the use of CO2 laser for this kind of mechanical processes are the heat generated and the relatively shallow depth of cut.

Effective selection of the laser processing parameters is key to avoid burning the cut edges of the food and for proper performance. For a depth of more than a few millimetres, several laser processing cycles are needed to allow sufficient time for the zone to cool. Other strategies are based on direct cooling of the laser-treated zone by using water or steam.

How will it benefit the food industry?

CO2 laser is a contact-less processing technology with a lot of potential for reducing cross contamination problems in the food industry.

It could be used in foods for a wide number of applications, such as cooking/grilling, marking, cutting, and peeling or for inactivating microorganisms presented on food contact surfaces.

To the authors’ knowledge, the only laser application that is fully industrialised and widespread in the food market, for direct action on food, is the laser marking of fruits and vegetables.

However, the results obtained in the other applications are promising, further effort is needed to bring them to market. Today there are CO2 laser systems with the necessary power and characteristics to industrialise most of the applications described in this article.

Thus, no major scaling problems are to be expected and it is foreseeable that their industrial use will begin to spread in the coming years. Since CO2 lasers are used in other industrial sectors, their cost has significantly decreased in the last two decades.

With this in mind, the cheaper cost will undoubtedly facilitate their implementation in the food industry, where margins are lower than in other production sectors.

Izaskun Pérez is an agricultural engineer and researcher at AZTI-

Basque Research and Technology Alliance (BRTA), where she participates in research projects on emerging technologies for the development and validation of new applications. In recent years she has participated in the development and implementation of two new production lines in companies (products currently on the market). Email: [email protected]

Xabier Murgui, agronomist engineer and Master in Technology and

Quality in Agro-food Industries, is currently a researcher at AZTI- Basque Research and Technology Alliance (BRTA). A professional in the food industry with more than 14 years of experience, he is specialised in the development of new products, scaling and industrialisation of prototypes. Email: [email protected]

‘Are We There Yet?’ Vacations Close To New York City

Guidelines & Assistance So You Can Travel Safely and securely

January 28, 2023 Paola Cattaneo
We use cookies on our website to give you the most relevant experience by remembering your preferences and repeat visits. By clicking “Accept All”, you consent to the use of ALL the cookies. However, you may visit "Cookie Settings" to provide a controlled consent.
Cookie SettingsAccept All
Manage consent